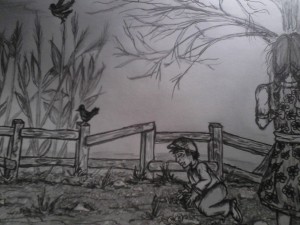 “Hurry up Rita, or we’ll miss the show.”  Sammy was so excited this morning that he’d woken up at sunrise and was in his sister’s room trying to get her up.  They had a long walk into town and he wanted to get an early start.

“Sammy, the show isn’t until noon, we have all morning to get there,” Rita said, as she pulled the covers over her head.

“But Rita, you know there’ll be a lot to see before the show starts.  C’mon, everyone’s going to be there.  I bet that Ted will get there early.”

That woke her up.  She’d been trying to get Ted’s attention since they started seventh grade.  “Well,” she said while getting out of bed, “I don’t care whether he’s there or not, but I guess it won’t hurt to get there a little early.”

Sammy might be two years younger than his thirteen year old sister, but he still knew how to get her to do what he wanted.  Their father had told them last night that he would have to leave before sunrise to work on the show, so if they wanted to go they would have to walk into town.  He was a carpenter, and a fair amount of work was required for the show to be ready on time.

After a quick breakfast, the kids headed out the door and began their two hour walk into town.  It was going to be an amazing day.  As they walked down the country lane, they could see other families starting their day.  Soon, other children joined them.  They were too excited to wait for their parents and were told to walk into town, but to stay out of the way.

“My mother said that there hasn’t been a show in town since she was my age,” said a girl about ten, “She said that she still remembers every detail about that day.”

Rita looked around at the fields and watched the corn as it gently swayed in the breeze, wanting to remember everything, so someday she would be able to tell her children. She watched as her brother stopped to pick up rocks to throw at the crows sitting along the tops of the fences, and listened to the excited chatter of the group of kids as they walked into town to see the show.

“My father said that they’ll let us kids get right in front, so that we’re sure to see everything,”  Sammy said, as he just missed hitting a crow that he almost caught off guard.

When they finally arrived in town, they were met with a carnival like atmosphere.  Children were running around, chasing each other while their parents stood in groups, talking to neighbors that they hadn’t seen in weeks. Rita spotted Ted with a group of boys that were watching her father and the other men as they finished building the stage for the show.  She walked over near the group of boys and said hi to her father, who smiled and waved back.

“Hi Rita,” Ted said, as the other boys poked him and snickered.

“Are you excited about the show?” he asked, as he walked over and stood next to her.

Excited about what show, she thought, as the excitement of having him stand so near made her dizzy.  “Sure,” she said, regaining her composure, “it should be a lot of fun.” Rita and Ted ended up spending the rest of the morning together, talking, and walking around watching the ‘kids’ play. The day seemed magical to her, she didn’t want it to end.

Eventually it was time for the show to start, and as they found their way to the front of the stage Rita was delighted when Ted held her hand.  She looked around at the crowd of smiling, excited faces, concentrating on every detail to commit it to memory, she didn’t want to forget any of it.  She shouldn’t have worried, because when she looked into the eyes of the man before they placed the hood over his head, and then put the rope around his neck, she would remember this for the rest of her life.

Illustration by Regina Jobe. Regina is an Art Teacher and does murals in her spare time. She is looking to illustrate children’s books.
Thanks Regina!

Posted on December 27, 2012 by JimsGotWeb in short stories

11 Responses to The Show