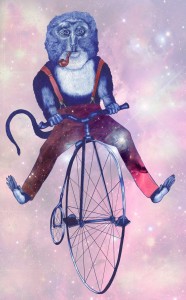 Tony has been raised by a couple of clowns. Literally.  His mom and dad are clowns in the Crowley Brothers circus.  Everyone has always assumed that Tony would grow up to be a clown, but he has different plans.

“There’s nothing wrong with being a clown,” he told his parents, “but, I want to be one of the artistes in the main show.”

“Tony, you’re a clown, “his father said, “Mr. Carson won’t allow you to be anything else.”

Herman Carson is in charge of the circus.  He’s very particular about people staying in their classes, and doesn’t like it when someone tries to challenge the circus hierarchy.

Tony has taught himself to juggle and ride a bicycle while balancing on the high wire, something that only a few of wire walkers can do.  Tony performed his act for Mr. Carson, sure that he would be impressed, but all he said was, “Great, kid.  That’ll be a good trick for the clown show.”

Tony thought that the only way Mr. Carson would put him in the main show, would be to disguise himself.  He decided to talk to Mother Maggie, the fortuneteller, to see if she could help.  Maggie only pretends to be a fortuneteller; she’s able to do a lot more than that.  Maggie’s a witch.  Once, when the tent-men were raising the center pole for the big top, Jack Hunt, the boss canvasman, was holding the base of the sixty-foot pole with his crowbar.  The base of the pole slipped and flew out of position, knocking the crowbar out of Jack’s hand, flying right at one of the workers.  Maggie was right there when it happened, and she closed her eyes, shook her head, and quietly said, “No.”  The bar missed hitting the man in the head by inches.

Tony asks Mother Maggie, who was sitting in the dark tent, staring into her crystal ball, “Will I always be a clown?”

She says, “I see you on the high-wire, riding your bicycle, and juggling.  You aren’t dressed as a clown, but you look different.  You’re wearing red trousers and suspenders, and smoking a pipe.”

Tony has been missing since Tuesday, the same day that the monkey showed up.

Mother Maggie told Mr. Carson, “A man brought it to me, said it was a Lesula, and that it could perform tricks on the high-wire.”

Who is Black Eyed Jack?  Black Eyed Jack, aka Jason Kattenhorn, is a freelance illustrator specialising in biro portraits.  From anthropomorphism to famous faces, with fridges filled resplendently with haunted cephalopodic terror thrown in for good measure.  Expect lots of biro and bewildering sights.  Take a look at some of his other work, visit him on FaceBook, and follow him on Twitter.  Tell him Jim said Hi!

Posted on February 23, 2013 by JimsGotWeb in short stories

One Response to The Altered Clown