Posted on August 20, 2012 by JimsGotWeb in short stories 3 Comments

Laurie was always online.  She was always blogging, paying her bills, sending emails, posting on Face Book, shopping, and on and on.  She had to find a way to save time online by having all those mundane things taken care of.  Then she would have more time to do the things that she really enjoyed.  One day, while looking on Craigslist for a used laptop computer, she saw an ad that caught her eye.

She contacted the seller, bought the computer and before long, she had it up and running.  At first, it seemed like an ordinary computer.  She used it to do all the things she always did while online.  Then she started getting messages, popups that seemed to be talking directly to her. 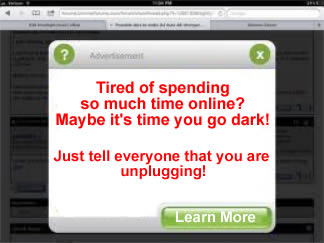 “Why not?” she thought, “I can’t remember the last time I’ve taken a vacation!”  So, she sent out emails to all of her contacts and left posts on Face Book that she was going offline for a while, taking a break from it all and going on vacation.  She’d always wanted to go on a cruise and that’s just what she did.  She spent 7 days on a Caribbean cruise, living the life of a Queen.  She had 7 days of no computer, no telephone, nothing but time, all the time in the world.

After the 3rd day, she started wondering how Patty was doing with her new dog, how Charlie was getting by without sending her emails every 20 minutes, and what level Ruth was on the CityVille game on Face Book.  On the 4th day, she found a public computer on the ship to check her email, but she wasn’t able to log on.  She couldn’t log on to Face Book either, her passwords were changed!  “That’s weird, I never change my passwords!”  She really started worrying when she realized that the passwords for all of her accounts had been changed.  Her bank account, her Amazon account, she couldn’t even access her Twitter account, and she hasn’t used that for years!  For the rest of the cruise she realized how much satisfaction she got out of being online.  She missed the constant interruption of her friends sending her messages.  She missed the trivial posts on Face Book about everyone’s daily life.  What was Robin having for dinner?  Were Susan’s kids happy at their new school?  She felt as if she was totally out of touch with her life, and she wanted it back!

The first thing she did when she got home from her vacation was to turn on her laptop.  But, it was already on!  How can that be?  She distinctly remembers turning it off before she left for her cruise!  What was going on?  That’s when she realized, this was no ordinary computer.  There was a message on the screen.