Book Review of “Over The Rim” by Ripley Patton 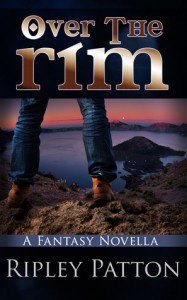 Over the Rim by Ripley Patton is a YA Fantasy Novella first published in 2009 in Andromedia Spaceways Inflight Magazine issue #42.  Nominated and short-listed for the Sir Julius Vogel Award for Best Novelette/Novella 2010.  Now published in March 2013 in e-book format.  It is available on Amazon.com: http://amzn.to/12GmGcA   ISBN: 978-0-9884910-2-1

Mike Abbott is a seventeen-year-old boy on a trip with his father and a dog.  He didn’t want the trip, or the dog.  He and his father are trying to deal with the trauma of a terrible accident.  When Mike walks along the rim of a 4,000-foot-deep volcanic crater, an incident occurs that sends him, and his dog, on a journey into another world.  Mike finds himself on the sacred island of the Lake People, where he has been summoned as the wizard to defeat the Wo-gey.  It’s a magical, mystical world, full of interesting people and amazing creatures.

This is a fun and exciting fantasy adventure.  It has an interesting story line with a surprise ending.  Ripley’s descriptions makes it easy to become part of the fantasy world she’s created.

Ripley’s short fiction has been nominated for awards multiple times, and she won the Sir Julius Vogel Award for Best Short Story 2009. Ghost Hand, a YA paranormal thriller, is her first novel, and the first in a three book series.

Posted on March 16, 2013 by JimsGotWeb in Book Reviews, short stories