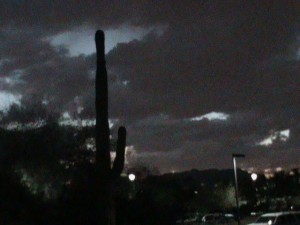 Tonight was his last performance.  The high council didn’t like the storm makers to become very popular with the public.  Drantonian was ready for the end, he had expected it to come much sooner.  It seems that he had been preparing all of his life for this final show; he had practiced it in his head, over and over, now the time was finally here.

He always liked to begin each program slowly, with a gentle, distant, rumbling that would create an atmosphere of anticipation for what was to come.  After allowing the audience to gather themselves, he would then create a visual illusion; a flash of light as if hidden behind a thick curtain.  He liked to repeat this a few times to lull the spectators into a comfortable state, making them think that nothing was going to happen that they weren’t capable of handling.  Then, he would jolt them into submission with a sudden burst of light and sound that would make the hair on the back of their necks tingle, and their hearts pound with fear.

Now, the storm maker had them where he wanted them.  A gentle rain began to fall, barely noticeable, just enough to cool the gentle breeze that had slowly surrounded the audience without them even noticing.  Was that it?  Is it over?  He could sense their relief, and the false pretense of disappointment.  He knew they were afraid of his power over them, and he savored the moment.

Most storm makers didn’t realize the importance of the pauses of calmness in their performance.  The interval was what created the anticipation, the desire for more.  He waited for the perfect moment, and then unleashed a burst of lightning and thunder that sent everyone for shelter.  He had predicated this and before they had a chance to escape, he released everything he had upon them, sending the rage and fury hidden deep inside of him.

He released the frustration of the unfairness of his life ending so prematurely, because of the vanity of a group that had long ago outlived its usefulness.  He had decided that if his life must end, then so would the life of his audience.  Raising his hands above his head and thrusting all of his power at once, he ended it.

Posted on October 4, 2012 by JimsGotWeb in short stories