I spent a couple of days at the Munich 2011 Oktoberfest and would highly recommend it to anyone who likes to drink beer in a large, friendly, crowd.

We went on a Wednesday so we didn’t have any trouble getting into a tent and sitting down. They will not serve you unless you are at a table. The tables where we sat all had “Reserved” signs on them but it was my understanding that most of them were for people who were coming in later in the day so you are welcome to use them until someone comes to claim them. We went into a few different tents just to see what they were like. 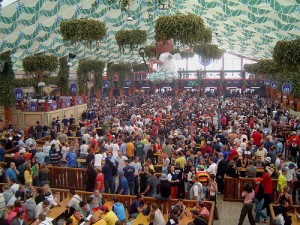 ent is the biggest beer-tent at the Oktoberfest, and the only one with a standing only area. When we went in it was around 10 A.M. and the party was going strong! We went to the standing area which is right in front of the bandstand and ordered beer and chicken that came right away. Every few minutes someone would stand on the bench at their table with a full stein of beer and hold it above his head. Everyone would start chanting and then he would try to chug it all down. If he did it, then everyone would cheer and applaud. If he didn’t, then he would get loud boos for his failure!

Another tent at the Oktoberfest that we visited was the Weinzelt. The band there was playing Elvis Presley tunes and other Rock songs, it was great to hear “Smoke On the Water” with a German accent!  While sitting at a table two ladies came up and gestured that they would like to sit with us, we said sure, have a seat. The next few hours that we spent communicating with them are some of my best memories of Oktoberfest. They couldn’t speak very much English and we couldn’t speak much German, but we were able to get past that barrier with a lot of drawing, pointing, and laughing!  They taught us the words to a toasting song that is sung every few minutes in all of the tents, “Ein Prosit der Gemütlichkeit”.

Here are some peop 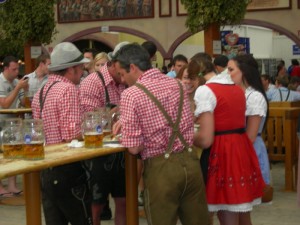 le inside the Hoffbrau tent at a standing table wearing their Dirndl and Lederhosen.  During the festival, which goes on 16 days, it is common to see people dressed like this in the stores, the restaurants, the train station, pretty much everywhere. 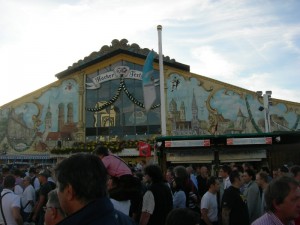 tzelt is one of the largest tents at Oktoberfest. The ceiling is painted with blue skies and white clouds which is the colors of the Bavarian flag, so the tent is popular with the locals. If you get tired of the brass bands this is the place to go, every evening starting at 5:30pm a Rock and Roll band performs. 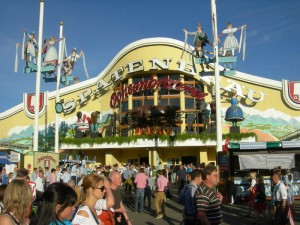 The Spatenbrau Tent at the Oktoberfest in Munich this year celebrates it’s 131 year at the festival. The feat of roasting an entire ox on a spit started in 1881 and turned the Spantenbrau into a real attraction which still goes on today.

Have you been to the Oktoberfest in Munich?